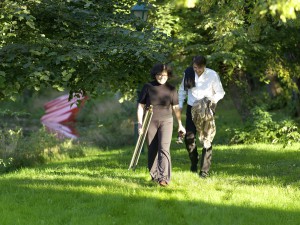 Peter Kainz was born in 1961 in Vienna where he finished a vocational education as a lithographer, offset-installer and photographer.
In 1995, as large format photography was implemented in Austria, he worked as one of the first digital photographers.
From 1995 to 2008 Peter Kainz taught digital technologies and reproduction techniques at the University of Applied Arts Vienna. In 1997 he established the studio “faksimile digital” with his wife, Birgit Kainz, which up until today serves as an atelier for digital photography and the conversion of artworks.
Since 1997 he was included in lots of cooperations with Walter Stach. Furthermore Peter Kainz has managed numerous lectures and workshops about digitalisation and archiving works of art. Simultaneously he wrote articles for books referencing visual arts.

1992 “Nachbar in Not” (neighbourhood in misery/poverty), a picture book for absconding women and their children
2005 Establishment of the long-term picture library “Collected Works across Europe” together with his wife
2005 Participation in “Der 6te Sinn” (the sixth sense) in Vienna
2006 “Pixel pile-up”, an article for the print media manual of visual arts, Vienna
Since 2006 “Fang das Licht” (Catch the light), a photographical conveyance-project within the “kids university” of arts, organised by the University of Applied Arts Vienna.
2007 Establishment of the edition “Collected Works”, a serial of artist catalogues connected with a public library.
Since 2008 Master program photography/image science at the Danube University Krems

2014 FOTOFEHLER – Exhibition in the Gallery artmark